A new report from JLL is hailing West Australia as an economic powerhouse in 2021. And not only is the west’s economy growing faster than any other state, but it wins the popularity contest for those Australian logistics companies and manufacturers looking for a home. 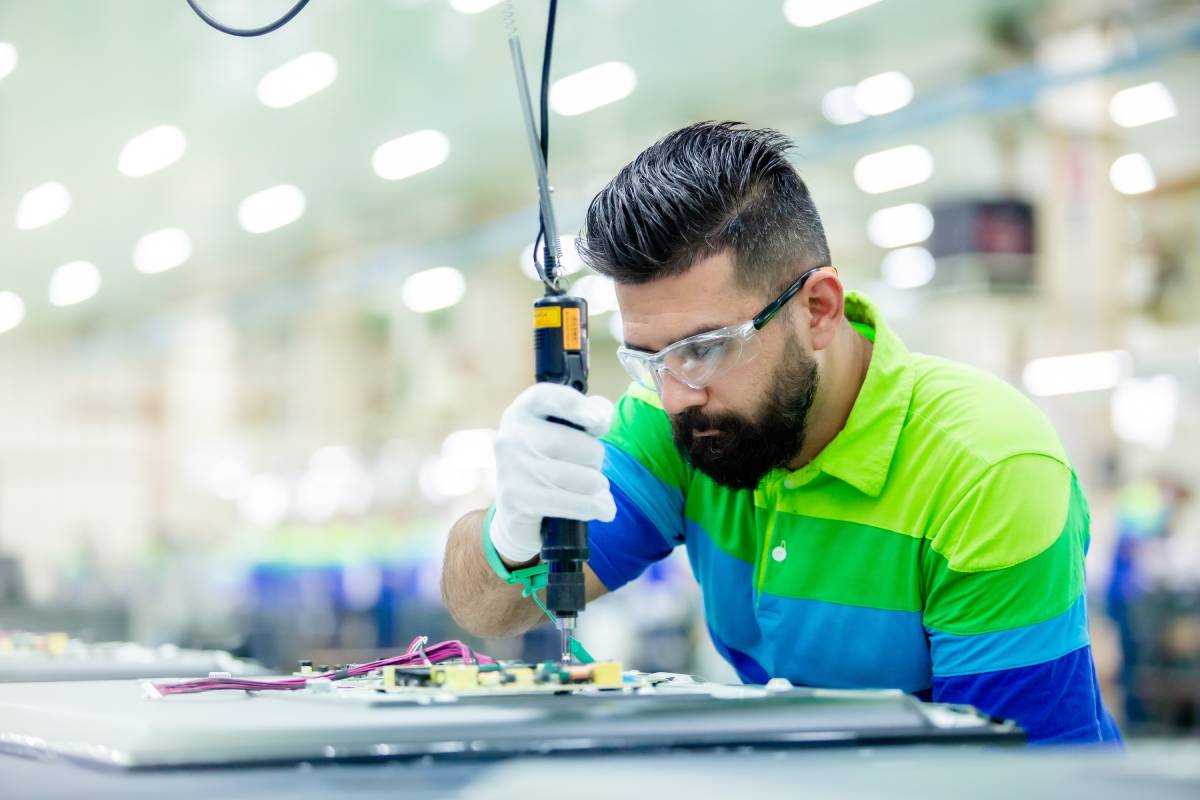 A new report from JLL is hailing West Australia as an economic powerhouse in 2021. And not only is the west’s economy growing faster than any other state, but it wins the popularity contest for those Australian logistics companies and manufacturers looking for a home.

WA’s industrial market is going gangbusters, with gross takeup over 2021 set to be the strongest since 2013, as a result of a multitude of factors. Before we highlight them, let’s see how WA compares to the national economy.

Much of this growth is owed to mining, with strong export prices for commodities contributing to a 3.2 per cent increase in nominal GDP (defined as the market value of goods and services produced in an economy, unadjusted for inflation).

But from which states is this growth coming from?

East coast economies are seeing some hurt, with NSW and Victorian economic growth already likely to have slown in the last couple of months due to fluctuating COVID-19 restrictions.

QLD is indeed faring better than most of its neighbours thanks to both agriculture and mining. But even sol, without agriculture contributing a mere 0.8-per cent of growth last financial year, regional QLD would have been close to falling into a recession.

As it turns out, it is WA’s success at controlling the coronavirus – ensuring the economy remains open and business activity continues – which has made it the fastest growing economy in the country.

WA’s State Final Demand (SFD), which measures economic output excluding trade, grew only 1.2 per cent during the June 2021 quarter. However, over the last 12 months to June 2021, SFD grew by 4.3 per cent, the fastest growth rate since 2012 and the strongest growth of any state on an annual basis.

Whether or not you agree with the state border closures, this is impressive pandemic-era growth. 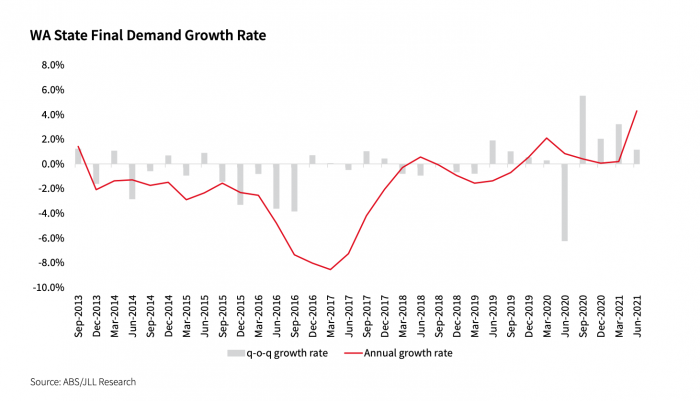 So, WA is seeing growth within its resources sector, a hive of activity in its construction sector, and huge stimulus measures to bolster WA’s manufacturing sector. The trio of output positives is a major contributor to the increase in machinery and equipment expenditure, which has led to business investment skyrocketing in the 12 months to June 2021.

Now, take this business investment and combine it with the increase in dwelling activity and household consumption, and you’ve found the trigger for industrial space demand.

The simple equation is this…

“WA’s economy is growing at its fastest pace since 2012,” says Ronak Bhimjiani, director of WA Research (JLL). It’s not hard to see why.

According to JLL, if you isolate WA’s economic growth from the national figures, you’ll discover WA’s economy performed better than all G20 countries over 1Q21. And there are a few reasons why.

While not breaking records, West Australia’s population is still rising. It has slowed to 0.6 per cent annual growth as at March 2021, but continues to outperform the national average of 0.1 per cent.

The affordability of West Australian housing makes Perth a popular choice for both interstate and international migrants, in comparison to east coast cities. With borders expected to reopen once the 90-per cent vaccination target is hit early in 2022, the lower comparable housing prices should lure east coast migrants to the west coast of Australia.

WA’s population growth is expected to grow 1.0 per cent annually between 2021 and 2025 – the second highest growth rate among all states.

The tide for logistics and warehouse demand in WA is strong.

As consumer confidence continues to bolster, rising to its highest level in 13 years according to the latest Chamber of Commerce and Industry WA (CCIWA) Consumer Confidence Survey, manufacturing tenants are scrounging for premises.

JLL Research shows takeup from manufacturing tenants already represents a larger share of overall industrial demand in the 12 months to June 2021 (19 per cent) versus the long-term average (15 per cent).

Couple consumer confidence with record-low unemployment rates (WA’s unemployment rate has fallen below 5 per cent since April 2021, the first it’s done so since 2014), and it’s no surprise we’re seeing double digit employment growth across a range of sectors. Manufacturing and warehousing are the stars of the show.

The increase in employment levels within these sectors (as well as the construction sector), has related to a significant improvement in demand for warehouse and logistics space. 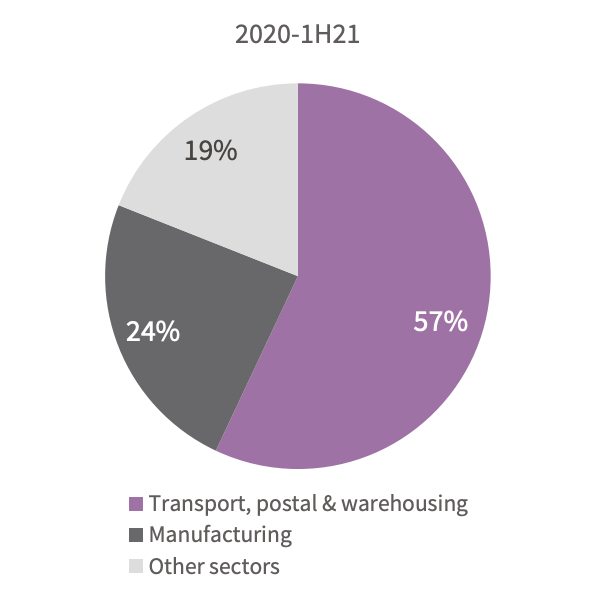 According to JLL, the manufacturing sector represented 19 per cent of overall industrial space take-up during 2020 and the first half of 2021, compared to the long-term average of 13 per cent.

Accelerated cap rate compression and rental growth have contributed to the expansion of WA’s industrial sector.

And don’t expect it to slow down (JLL doesn’t). The report projections indicate Perth’s industrial market capitalisation will reach AUD 15.3 billion by 2025 and AUD 17.2 by 2030 (up 31% from the current level).

What does this mean for investors?

Strong demand, coupled with limited supply of stock, has led to the appreciation in land, rent, and capital values, placing downward pressure on transaction yields.

As at 2021’s second quarter, the spread between Perth and Sydney prime industrial yield was 163 bps, versus the long-term average of 84 bps. This wider-than-average spread creates a very compelling case for investing in Perth industrial assets due to the solid opportunity for capital appreciation.

The first half of 2021 has already seen Perth industrial rents (in some precincts) increase by 4.5 per cent. 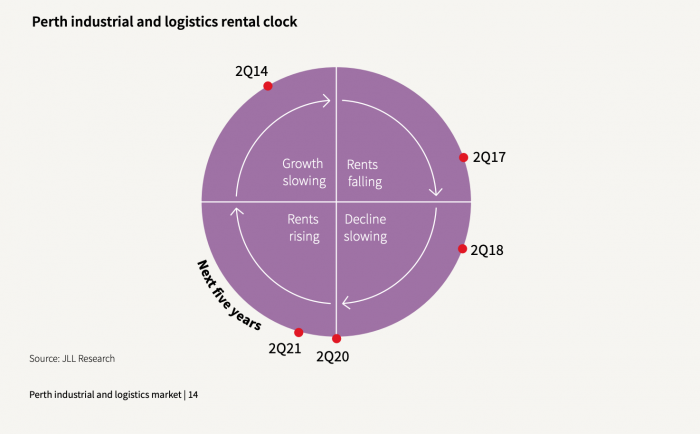 Want more real estate info like this, straight to your inbox? Subscribe to our newsletter and join our growing list of subscribers receiving monthly real estate updates.